AIR is monitoring Tropical Storm Elsa, located at 21.4°N, 80.7°W, with maximum sustained winds of 65 mph and a central pressure of 1006 mb, as of 8 a.m. Atlantic Standard Time on July 5, according to the National Hurricane Center (NHC). 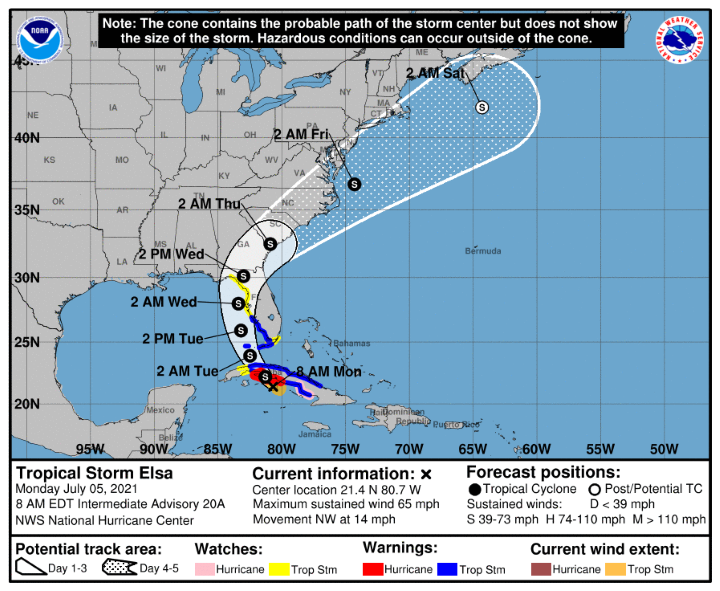 According to NHC, Elsa appears to be a relatively small cyclone holding steady in its intensity while moving northwestward at 14 mph just south of central Cuba. Given the overall favorable environmental conditions, Elsa could strengthen a little before it reaches the coast of Cuba later this morning. Some weakening is then expected due to the land interaction with Cuba, but most of the model guidance suggests that Elsa could restrengthen slightly in the Florida Strait before it moves inland over Florida. Significant strengthening, i.e., to hurricane strength, is not anticipated though due to moderate wind shear.

After moving over central Cuba this morning, Elsa is expected to make a gradual turn to the north in the next day or so, then move near the Florida Keys tonight or early Tuesday, July 6, then along or very near the west coast of Florida later on Tuesday, through early Wednesday, July 7. It should be noted that given the expected track, much of the west coast of Florida will be on the east side of Elsa, which is where the strongest winds, highest surge, and heaviest rains are expected to be. Given the expected parallel motion to the coast, much of the west coast of the State of Florida will likely see impacts from Elsa on Tuesday and into Wednesday. After Elsa clears Florida, it is expected to pick up speed, though gradually weaken as it moves north-northeastward across coastal Georgia and the Carolinas Wednesday and Thursday, July 8, before moving over the western Atlantic.

The NOAA Hurricane Hunters will be investigating Elsa again shortly, and the data the plane collects will be valuable in assessing the storm's intensity and wind field.

Heavy rain will impact the Cayman Islands and Cuba today. Tropical storm conditions and a dangerous storm surge are expected to continue across parts of central and western Cuba today. Hurricane conditions are also possible along the south coast this morning.

Tropical storm conditions are expected in portions of the Florida Keys and southwestern Florida tonight and Tuesday, where a Tropical Storm Warning is in effect. A Tropical Storm Watch and a Storm Surge Watch are in effect for much of the west coast of Florida.

As Elsa approaches the Florida Keys, Florida Peninsula, and coastal Georgia today through Wednesday, July 7, heavy rainfall may result in isolated flash, urban, and minor river flooding. There is a risk of tropical storm conditions and storm surge impacts along the coasts of Georgia and the Carolinas Wednesday and Thursday, July 8. Mid to late week, heavy rains across coastal South Carolina and North Carolina may result in isolated flash and urban flooding.

Elsa is currently projected to make an eventual landfall in the U.S. as a tropical storm tomorrow or Wednesday. If this forecast holds, AIR will not release similar stochastic events for this storm. If Elsa strengthens and is projected to make landfall in the mainland U.S. as a hurricane, however, AIR will begin to release similar stochastic events, and, assuming the forecast remains for a hurricane landfall, each day at 10:00 a.m. EDT through landfall.

For the Caribbean impacts from Elsa, AIR does not plan to issue similar stochastic events at this time.

Please be aware that additional information on Hurricane Elsa is available to Verisk Weather Respond subscribers. Beginning Wednesday, June 30, and continuing through U.S. landfall, Respond® subscribers receive data packs that include forecast wind footprints for Elsa four times daily. These footprints can be analyzed in any GIS tool to evaluate the strength, path, and impact of the event as it approaches land. Contact your AIR or Verisk representative to learn more about this and other Verisk Real-Time Analytics that can be paired with ALERT®.

AIR continues to monitor Elsa and will provide another ALERT update at 9 a.m. EDT tomorrow, July 6.