On April 27, convection was initiated along and to the east of a dryline oriented north/south through central TX. Flash flooding, several tornadoes, and multiple reports of hail as large as 3” from this batch of severe weather caused damage to structures in TX and, to a lesser extent, OK. Convection from this Southern Plains round of storms subsided somewhat overnight, but diurnal heating firing up again on April 28th resulted in a few more tornadoes in the Central Mississippi Valley, hail up to 4” in TX, and damaging high wind reports. 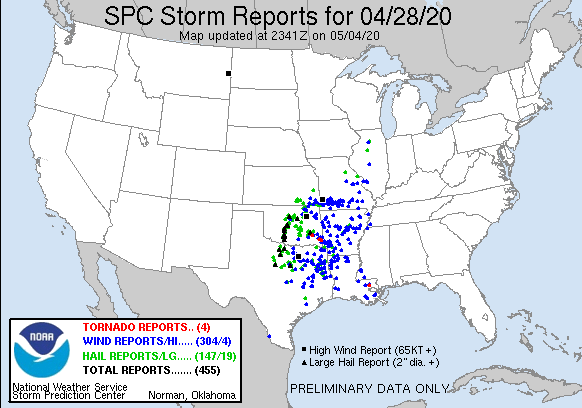 Daily hail and straight-line wind footprints from severe thunderstorm events are available for license through our partners at Verisk Weather Solutions.

Read AIR's blog about the largest super outbreak on record, which occurred 10 years ago, here.

No further ALERT posts are planned for this event.